The First Biogas Plant from ARCHEA in the Region of Cordoba, Argentina 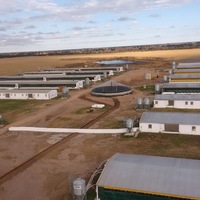 After the successful implementation of projects in South Brazil, ARCHEA New Energy is now expanding further in the Latin American area by means of its subsidiary company ARCHEA America Latina.
The medium-sized company from Hessisch-Oldendorf is building a 250 kW biogas plant for the agricultural cooperative "Sociedad Rural de Jesus Maria". The client and later operator is a 1946 merger of predominantly smaller farmers of a well-known agricultural region about 50 km north of the city of Cordoba in the heart of Argentina.
The area around Jesús Maria is famous for its wine and salamis specialties. Historically, the place developed from a country estate founded by Spanish settlers who produced the famous Lagrimilla, the first wine from America, which was also tasted by the King's House in Madrid. The buildings are today part of the World Cultural Heritage of UNESCO. After connecting to the rail network in 1873, Jesús Maria gradually began to turn into a small town, which now accounts for 40,000 inhabitants in the agglomeration with Colonia Caroya and Sinsacate.
The economy is strongly influenced by agriculture, cattle breeding and food production.
The animal husbandry in this environment also produces environmental problems due to organic waste. This is where ARCHEA is prepared to help and can provide a disposal solution based on closed production circuits, which simultaneously serves as a decentralized energy supply of the Sociedad Rural de Jesus Maria farms. The ARCHEA's innovative system is optimized to digest the produced masses of pig and bovine manure and the waste of the slaughterhouses, so that a high gas yield is obtained, which can finally be converted into electricity by a cogeneration plant.
Oliver Nacke, Managing Director of ARCHEA, emphasized the good cooperation with Luis Picat, the director of the cooperative, and his team.
The high level of education is due to constant efforts of the "Sociedad Rural de Jesus Maria" in the training and further education of its employees and members.
With the new project in Argentina, ARCHEA once again emphasizes the sustainability-oriented course of the company: firstly, to solve decentralized environmental and waste disposal problems and, at the same time, to create decentralized energy supply facilities, the output of which is directly used by the local economic operators and people, but without any government subsidies preferably.
On the other hand, local partners are directly involved and generate a large part of the locally added value.
The first groundbreaking ceremony and the official presentation of the project took place during the "Expo Rural 2016". Oliver Nacke is confident that he will be able to put the plant into operation next year, and that he can rely on his well-established team of employees, who have proved their skills and commitment even under difficult conditions, such as in India.
Do you have questions about our activities?
Service-Hotline: +49 5152-528270